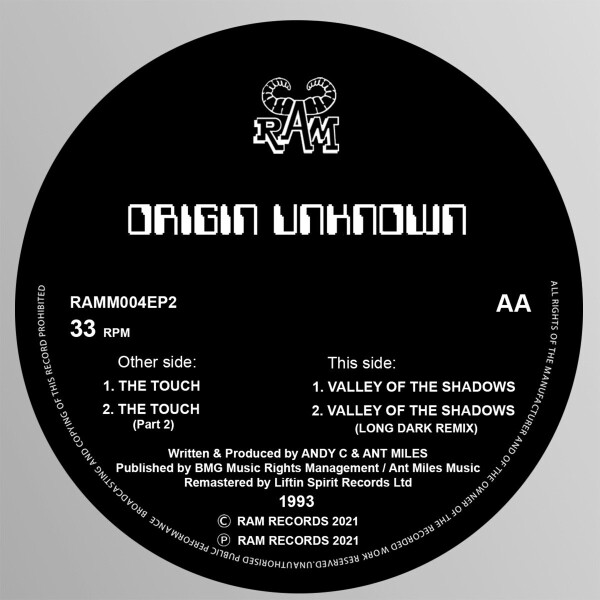 * Following on from the success of our 'Liftin Spirit Reloaded' vinyl series, we are pleased to announce our next project in collaboration with Ram Records. 'Ram Reloaded' will be a series of limited 12" vinyl from Ram's early years, re-mastered from the original DATs and presented onto our usual, high quality, heavy weight vinyl.

* In 1993, Andy C & Ant Miles set out about creating a fourth release for the newly established Ram Records, now just a year old. With Hardcore still prominent in the clubs around the world, The Touch features rollercoaster bass swoops against energetic breaks flowing around the main sung vocal "c'mon and touch me". An early sign of the precision arrangements that became synonymous of Ram's early sound that followed over for many years. Whilst going through the remaining samples in the sampler that had not been used on the A side, the pair suddenly went on a tangent with one of the drum breaks. Experimenting with the new timestretch function in the Akai sampler, they soon had a shuffle groove layered and moving. With Ant Miles' sculpted and edited arpeggio bell line sample, a new overall sound and vibe was beginning to emerge out of their studio Atari ST computer. Utilising an original organic analogue string pad, the haunting sinister vibe became complete. With the vocal from the BBC QED documentary 'Glimpses of Death' - "I felt, like I was in a long dark tunnel" all that remained was one of the most memorable pounding bass lines to sit underneath it all. The result was an instant impact on the scene, heralded as one of the first anthems of the Jungle genre. Multi award-winning and the track that cemented Andy & Ant and their label Ram Records within the scene.
Promotion across chosen internet websites and Hardcore/Jungle 12" vinyl communities.