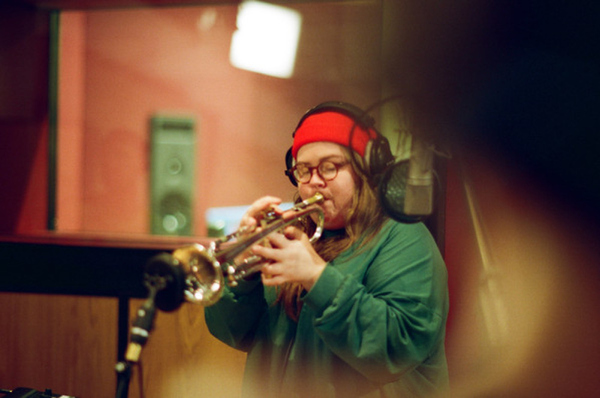 An accomplished trumpeter, beat-maker, singer, composer and DJ, Thackray draws on far wider influences than jazz. Her sound is distinctive; in the words of The Guardian like “Bitches Brewera Miles entering the dub chamber with a New Orleans marching band – in a good way”.

Raised in Yorkshire, Thackray inherited a grounding in Taoism from her father, and approaches her music with the same pursuit of harmony between Um & Yang (the Korean Ying & Yang), balancing melody and rhythm, groove and free improvisation, cerebral and physical. For this one-off recording, Thackray has applied this ideology in every sense, even down to the ensemble itself featuring not one but two percussionists. Um commences with ethereal interplay between keys, percussion, and Thackray’s trumpet, recalling the spiritual jazz of Alice Coltrane’s classic records. As the piece builds, an earthy groove emerges. On both trumpet and vocals, Thackray leads the ensemble further out until the piece peaks with an epic breakdown. On the flip, Yang starts on the same cacophonous note but progresses to a joyful groove before returning to a peaceful state again, balance restored.