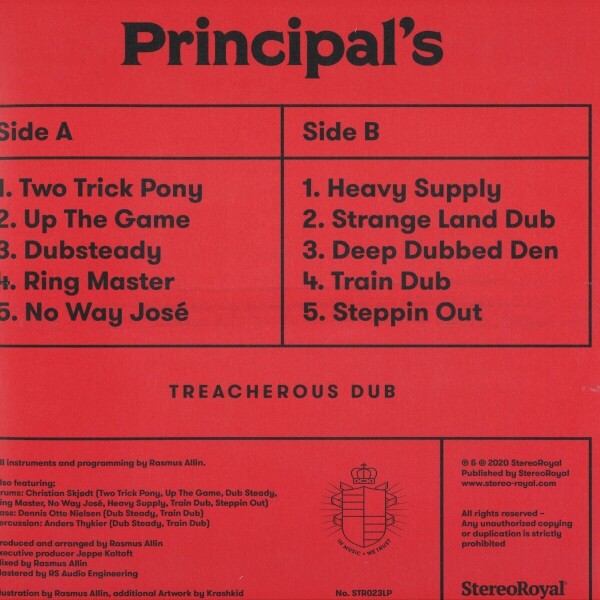 Principal is the new solo project by producer and musician Rasmus Allin, who’s first album Treacherous Dub will be released on the Copenhagen-based label StereoRoyal in July 2020.

Best described as an homage to old-school Jamaican dub, Principal’s music features live recorded drums and other instruments. Fused with electronic elements, it celebrates the sound of the original dub pioneers.

Born in 1970, Rasmus Allin has been working as a producer, musician, and songwriter since the mid-nineties, primarily within the realm of electronic music. Inspired by the British trip hop and drum ‘n’ bass scene, he soon gravitated towards Jamaican dub, rocksteady, and reggae. "I found my inspiration in the old Jamaican dub masters like Lee Scratch Perry, King Tubby, Augustus Pablo, and Scientist. I’ve spent endless hours in the studio trying to replicate their sound, using old tape delays, filter boxes, and modulation effects,” he says.

In 2002, Allin formed the band Junkyard Productions, playing major venues and festivals like Elysee Montmartre, Le Triptyque, Télérama Dub Festival, and Roskilde Festival while touring through Denmark, Germany, Switzerland, and France. Alongside this, he continued to hone his skills in producing, co-writing, and remixing music, working with top Danish pop and reggae acts the likes of Natasja, Pharfar, Wafande, Shaka Loveless, and the British girl band All Saints.

Treacherous Dub will be released on vinyl and all major streaming platforms, and will be Allin’s first album of pure instrumental dub tracks —an ambition he’s been wanting to fulfil for years. Marking his debut as a solo artist, the album also marks his premiere as a visual artist, with the album cover lithograph made by Allin himself. For Rasmus Allin, the collaboration with StereoRoyal offered “the perfect opportunity to give the tracks the finishing touches.”