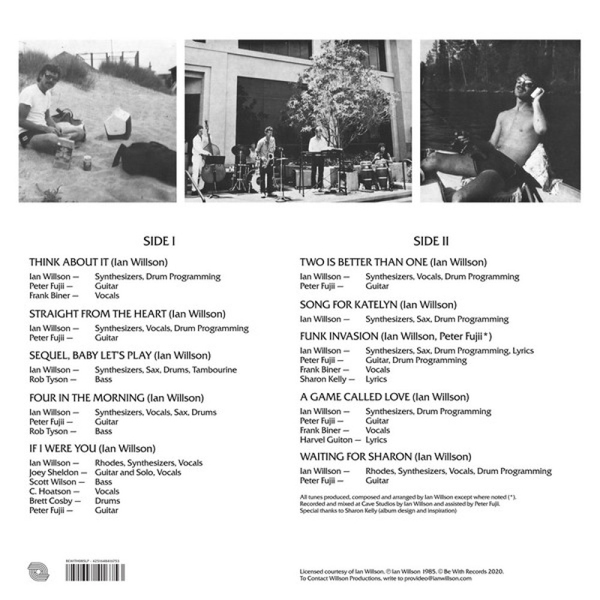 We’ve worked with Ian Willson to reissue his insanely good, self-released West Coast classic “Straight From The Heart”. Privately pressed and originally released in 1985, this is the only album Ian ever put out. A magical blend of AOR/sophisticated funk/synth-boogie/spiritual jazz and modern soul, it’s a spellbinding record of many colours. You might already know “Straight From The Heart” for the dubby-disco paranoid-balearic anthem “Four In The Morning”, and it’s easy to assume this is probably just another one of those one-track LPs. But trust us when we say it’s definitely not. This is an impressively slick record from start to finish, just ask those modern soul DJs and AOR collectors who’ve managed to find a rare copy in the last 35 years. It could’ve (should’ve?) been number 1 all over the world back in 1985. Album opener “Think About It” is all sorts of right. It’s emotional. It’s tops-off. It’s funk in its purest form. And take the proto-modern-funk of the title track (half Dâm-Funk / half Dâd-Funk). The shimmering, spiritual Bossa-Jazz of “If I Were You” serves as the album’s soaring centrepiece. A gorgeous suite of Cosmic vibes to get Gilles frothing, it sounds like nothing else on the record which makes sense given that it was recorded a couple of years earlier, and is the only track on the LP that wasn’t recorded in Ian’s own studio. Side B opens with the propulsive ode to love that is “Two Is Better Than One”. Wonderfully sparse when it needs to be, it’s also richly percussive and that special kind of Californi