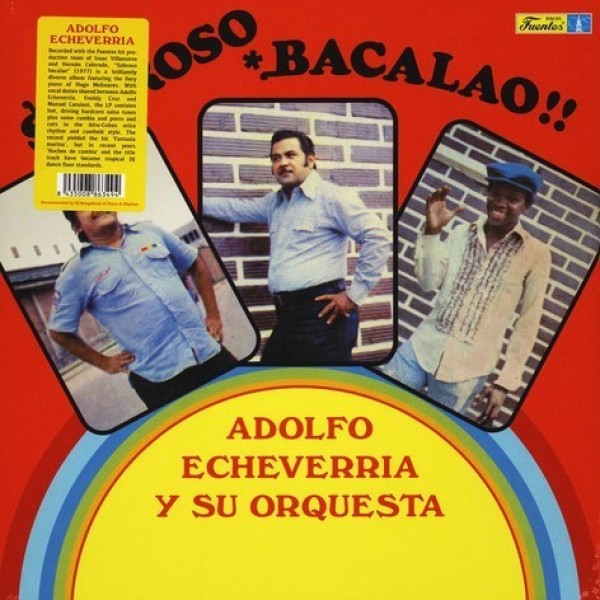 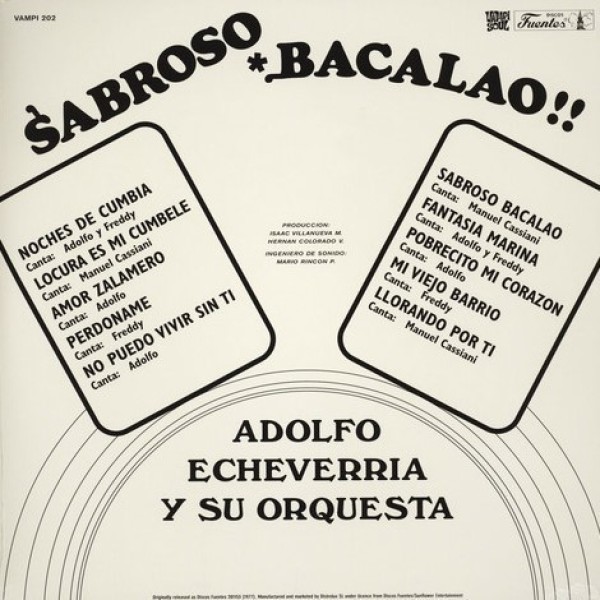 First ever reissue of "Sabroso bacalao" by Adolfo Echeverría y su Orquesta, released on Colombia's Discos Fuentes in 1977. Recorded with the hit production team of Isaac Villanueva and Hernán Colorado, and with vocal duties shared between Adolfo, Freddy Cruz and Manuel Cassiani, this is a diverse genre-hopping album featuring the fiery piano of Hugo Molinares, who also composed the monster guaguancó track 'Sabroso bacalao'. In addition to hot, driving hardcore salsa tunes, the LP includes some cumbia and porro plus cuts in the Afro-Cuban oriza rhythm and the cumbelé style, which is a variant on the bomba, an Afro-Puerto Rican folkloric drum-based genre. The album yielded the hit 'Fantasía marina', but in recent years 'Noches de cumbia' and the title track have become tropical DJ dance floor standards across the globe, making this record a must-have for collectors, disk jockeys and aficionados of the classic Fuentes sound. Presented in facsimile artwork and pressed on 180g vinyl. Part of Vampisoul's reissue series of classic Fuentes LPs. More details: Born on September 3, 1934 in the barrio of San Roque in Barranquilla, Adolfo Ernesto Echeverría Comas started singing on the radio first as a young man, forming his own conjunto and signing with various labels over the years, becoming one of Colombia's premier band leaders, composers, interpreters and producers of tropical costeño music in the process. Among many other accolades, he is a winner of five Congo de Oro and one El Cacique de Oro awards; his holiday songs 'Las cuatro fiestas' and 'La Inmaculada' are recognized as national treasures. During his long and successful career, he has toured Venezuela, Panamá and Ecuador, and while performing in the United States was befriended by Celia Cruz and Tito Puente. Recognizing his songwriting talents, the pair asked him for a tune and he gave them 'Salsa de tomate', inspired by Tito's hatred of the term, which they recorded for their "Alma con alma" release on Tico Records