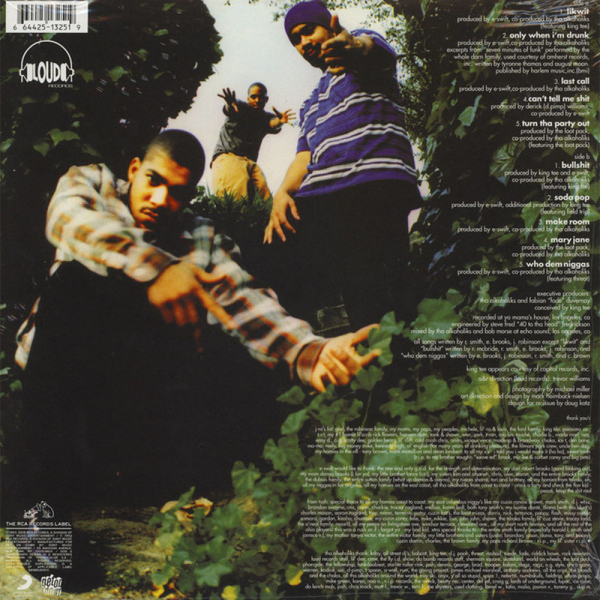 The Alkaholiks, like their LA peers Cypress Hill, had three
important things going for them – lots of charisma,
top-shelf rhyme skills, and a sound that perfectly straddled
both East and West Coasts. Their deep funk and
hard-as-nails beats and overall production put them in a
perfect position to make an impression with fans, no
matter where those fans were.
The group boasted a triple threat of MCs – E-Swift (who
also produced), Tash and J-Ro – and they packed a strong
punch with their 1993 debut, 21 & Over. It will surprise no
one from names of the group and the album, but drinking
takes up a lot of time here, including classic tracks – which
doubled as album singles – like the rolling, ultra-funky
“Make Room” and the hilarious “Only When I’m Drunk,”
the latter fueled by the classic block-party break “Seven
Minutes Of Funk.”
One lesser-known element of the group’s debut was the
introduction of the now mythical producer and MC Madlib,
who produced the dusty “Mary Jane” and the ridiculously
funky, churning “Turn Tha Party Out” (under the name The
Loot Pack, with DJ Romes). Both tracks are dope as hell,
and perfectly fit the group’s sound, showing that they also
had an ear for up-and-coming talent.
An interesting old-school angle on the album is that
several tracks feature LA legend King Tee on production
and vocals (“Last Call”, “Soda Pop” and “Bullshit”). Tee
was an early supporter of the trio who helped to oversee
the album for Loud Records after they appeared on his
banging 1992 single “Got It Bad Y’all.”
There’s not a bum track in the bunch here, and younger rap
fans just getting hip to them will undoubtedly be asking
where the Alkaholiks have been all their lives.