Two years on from the release of his debut album called 'Natureboy', Dario Rojo Guerra, aka Natureboy Flako, is back with a new six-song Mini Album EP on Five Easy Pieces.

Two years on from the release of his debut album called 'Natureboy', Dario Rojo Guerra, aka Natureboy Flako, is back with a new six-song EP on Five Easy Pieces. 'Natureboy Flako' is a self-titled collection of music culled from over 200 recording sessions since Guerra moved from London to Berlin in late 2015. It's the first work that unites the artistic identity of Flako with that of the Natureboy persona at the heart of his debut album, and is the debut for a new artist name: Natureboy Flako. Moving away from the live instrumentation of his debut LP, 'Natureboy Flako' is the most electronic-sounding record he's made, using old analogue equipment such as Korg's MS-20, ARP Odyssey and Roland's SH-2000 synthesisers, as well as new instruments such as Arturia's MiniBrute. Where previous songs relied on overdubs, most of these songs were recorded in one take, with little overdubbing, making it his most live record to date. As with 2015's album 'Natureboy', the six-song EP sees Guerra searching for musical balance. Both sides of the record offer contrasting energies, with the A-side featuring some of the heaviest tracks he's made and the cinematic B-side made up of more reflective compositions. However, both sides are equally propulsive, with driving arpeggios forming the backbone of much of the EP. 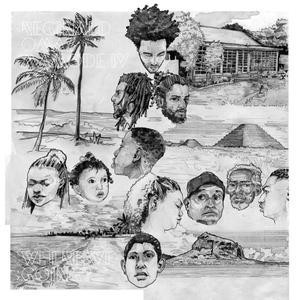 Where We Going? (LP)