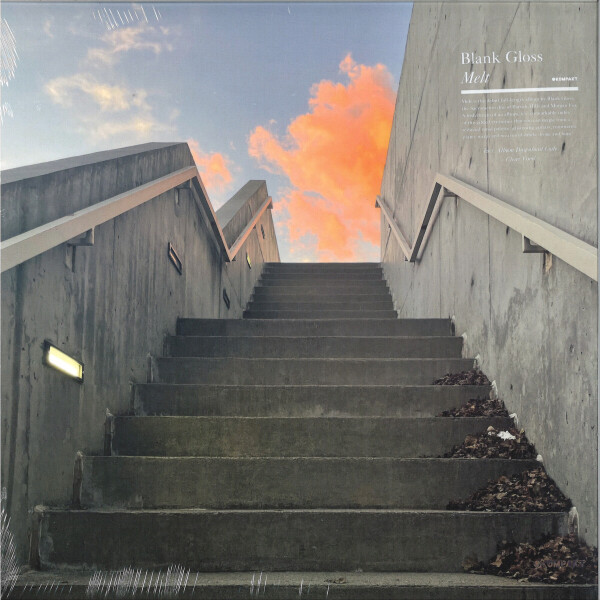 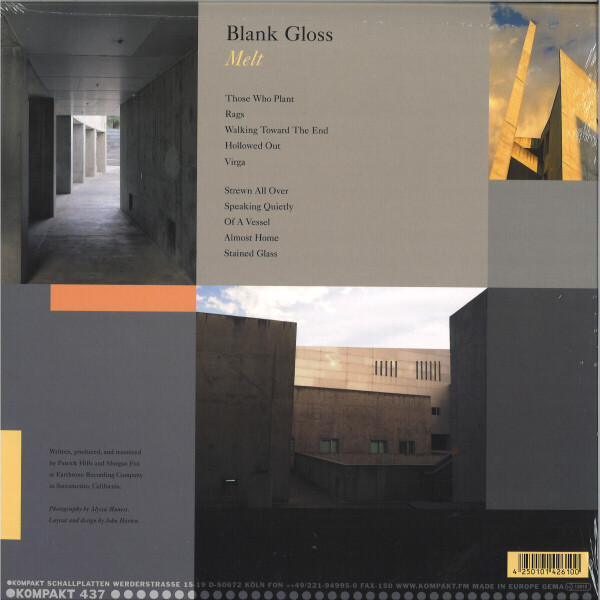 Melt is the debut full-length album by Blank Gloss, the Sacramento duo of Patrick Hills and Morgan Fox. Attentive listeners will recall their lovely contribution to Kompakt’s Pop Ambient 2021, “Of A Vessel”, which reappears here; others might know their 2020 mini-album, January, released on the stylish Miami label Night Young. With Melt, Blank Gloss make a heavy contribution to Kompakt’s ongoing explorations of the hundreds of hues of Pop Ambience. A lush dream of an album, it’s a remarkable index of the gilded eternities that you can magic from a reduced tonal palette: glistening guitars, ruminative piano, warps and weaves of subtle drone and hum.

The two members of Blank Gloss met through their shared involvement in punk and experimental music. Fox’s band had recorded at Hills’ Earthtone studio a number of times; they hit it off and made the decision to explore making music together. Their initial explorations resulted in their mini-album, January; for Melt, they aimed for something more minimal and improvised. “We tried to go into it without many preconceived notions,” Fox recalls. “We tried not to overthink what was happening or spend too much time hyper-focused on any one thing. We found it more enjoyable to make and to listen to when we just let whatever was happening happen.” This process freed Fox and Hills to make music that’s guided by intuition, inhabiting the moment and reaching for the next surprising possibility.

The long reels of e-bow guitar that wind through opener “Those Who Plant” ease the listener into an album that says plenty by doing less: witness the dream scripts that play out through pieces like “Hollowed Out” and “Of A Vessel”, the gentle weightlessness of “Almost Home”, or the clusters of guitar, expressive yet restrained, that sculpt “Rags” into being. It’s an album that feels sui generis, somehow, much as it clearly sits within a number of fields – pop ambient, touches of new age and drone music. Some provisional clues, though, fo