Sing Studio One And More

Lascelles Perkins was one of the first stars of the Jamaican music scene. Studio One's leading balladeer and one of the most underrated singers from that time. Lascelles Perkins sang sentimental ballads and he scored massive local hits for Coxsone Dodd's Studio One label. Songs like 'Lonely Moments' and 'Together Forever' other big hits followed 'The Mighty Organ' song as a duet with Hortense Ellis, Alton Ellis' sister, 'Destiny' and a whole catalogue of standards or foreign songs as they were called. Lascelles could sing any song, make it seem effortless and at the same time address it in his own unique style.

Lascelles Perkins was present at the birth of Studio One, at the initial sessions carried out in 1959 alongside the other big singers of the day, Alton Ellis and Basil Gabbidone. The session took place at Federal Studios and as was the method of recording at the time, the studio would have one mic hanging down in the middle of the room. The singer would be nearest to the mic and the musicians, depending on how loud their instrument was, would place themselves accordingly in the room. Everything was one take or you would have to record the whole song again. The singers and the musicians would have to be at the top of their game and would be paid for each side they cut. Doing things over would mean less songs finished, time and money was tight but this discipline made the great records we know today.

We have captured Mr Perkins on some lost tapes from producer Bunny Lee's archive that capture Lascelles singing some of the big Studio One hits of the day.

'Rain from the Skies', 'Stick By Me', 2Love me Forever' and 'No Man is an Island'. Alongside other great tunes from the time like 'Dancing Mood', 'Pledging My Love', 'Take My Hand', 'Never Never' and 'Dinner For One'. Let's hope this set gets Lascelles Perkins back on the musical map and listened to by a whole new audience. Top tunes performed in a style that seems effortless yet is only possible if one 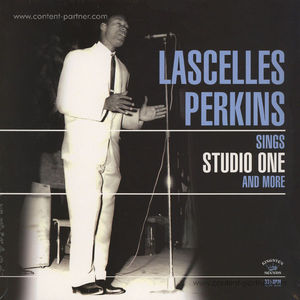 Sing Studio One and More